Marketing Insight: Hype Curve, Bell Curve, and Long Tail - how to profit regardless of the economic downturn

I've recently been proving all those Madison Avenue psych studies right. By studying Cialdini, Gladwell, and Godin it pretty much says that we are actually being herded along in our tribes quite nicely. Of course my secret weapon in this is to study Maslow and then see that these tribes are far from being destructive, but are actually heading toward a better future quality of life for all members.

Madison Avenue has been helping, in their odd way, to enable people to spend their way to a better material quality of living. To do this, they need to keep earning more money than they have before. And people get sold on getting their kids through college (another tribe grist-mill) and living better lives.

Our use of this, of course, is to learn not to become effect of every marketing frenzy that comes along - and to re-learn our own mental habits so that we can make our own independent decisions. But meanwhile, as we become the lighthouse on the rocky shore for other ships passing through this storm we call life - we have to use these data to help people find our routes to success. Not that they have to follow it exactly - you just want people to be able to find it and utilize it. And if they become independent thinkers as well - hey, we might wind up with a huge tribe of people who care for each other and do the right thing more instinctively. Better for all of us on this small single world we share.

OK, today I wanted to tell you more about this tribe stuff and some fascinating explanations of what we go through.


Gartner's Hype Cycle, Bridging the Gap, and Fads Vs. Evolution


First off, there's Gartner's hype cycle - which of course is full of hype. But it tells us that not everything is a fad. Somethings make their way into society and do quite nicely after they are widely adopted. Beany Babies aren't one. Fire and the Wheel apparently are.

Someone else approached the same concept of technology adoption and talks about Bridging the Gap for early adopters, using the Bell Curve to show where early adopters, mainstreamers, and laggards show up. Unfortunately, this model only says that demand dies out for every new adoption.

A really bright lad made a great point over at Trashmarketing when he superimposed the two graphs. Not all of his arguments follow, but it's a great start. 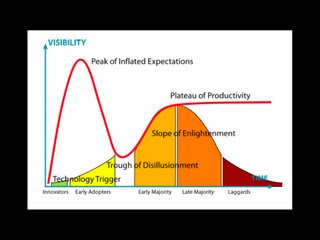 He opines that hype is much greater during the early adopters phase and that the chatter drops off as the mainstreaming begins.

Gartner is talking about technology and adoption curves. Use of the bell curve and this gap theory is fine for fads - but says that people won't continue using an item.

I think that we are somewhere in the middle of these two curves. (And you'll see that the Long Tail curve also is represented there - if you look closely around "Late Majority and Laggards')

But you'll see what I mean when you look at Detroit's growth and decline. Compare the Edsel and the Mustang and you can see where Ford missed the boat and made it. Social media is going through this same scene, as some platforms are bought up and drop off. Practically, Nasdaq and our current real-estate economy bubble burst (thanks to Bill Clinton, Barney Franks, ACORN and Chris Dodd for our US version) show this same hype curve to some degree. At least for now.

And technology stocks as well as real-estate will always be with us - much as Jesus talked about the poor. So there is some combination of these to start making sense out of things. Sure, the hoop skirt never caught on, but the mini-skirt is still around - just not as hyped as before (but just as enticing to males).

How do we use this? Realize that your marketing efforts have to be way out ahead of everyone else. What you are looking for are early adopter evangelists and "sneezers" (per Gladwell's Tipping Point) in order to help your product get critical mass. And be prepared for that Dip (Godin wrote a book about it - which I haven't read).

But you are wanting to keep true to your main, core idea and purpose - both of yourself and of your business. You are there, actually, to help move society and this culture forward - to help it evolve. Don't worry if your company and product get snapped up and incorporated into some behemoth current juggernaut. Turn it over and start your next one - you've now got your own financing as that startup just went mainstream. Time for your next startup.

The main point is to keep on keeping on. Don't listen to the Joneses - but figure out what they really need next and offer them a better solution than the one they have. Like the fries at MacDonald's which formed the basis for a world-wide trend in fast-food. Or that entrepreneur who found out that selling everything for a little less made a lot more profit - Sam Walton created a very recession-proof business which has improved the lives of millions through his ideas like spoke-and-wheel distribution.

So: the sky is no limit, actually. Just get out there and create your tail off. Learn from the best and do better than them. With what we can now know in this Internet Age, anyone can retire several times over after creating their booms, not bubbles.

Posted by robertworstell at 6:02 AM